I attended the As Easy As Raspberry PI event at UCD yesterday. There was a lot of information given on the day so here are my highlights! This is heavily edited and biased towards my 'Systems Librarian' hat...
(This is a longer post than usual as I am also gathering information to come back to later myself including interesting links and videos.)

As always any errors, omissions or inaccuracy's are my own, so check it out online for yourself if you want additional information. (let me know if I got it wrong...) Dodgy iPhone photos from the day are liberally scattered about the blog post. This first series shows it connected to other hardware fulfilling day to day technology roles / different configurations. 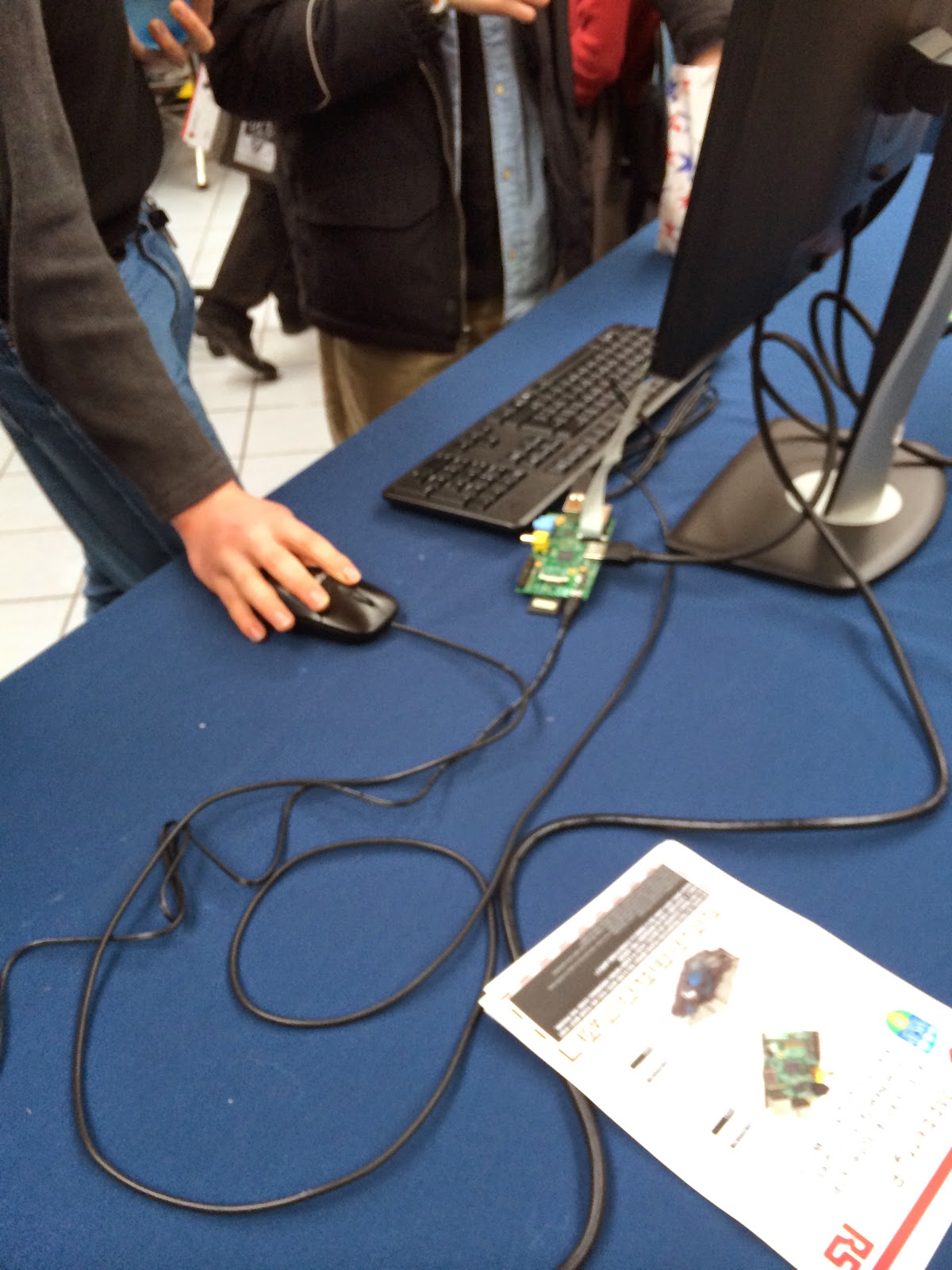 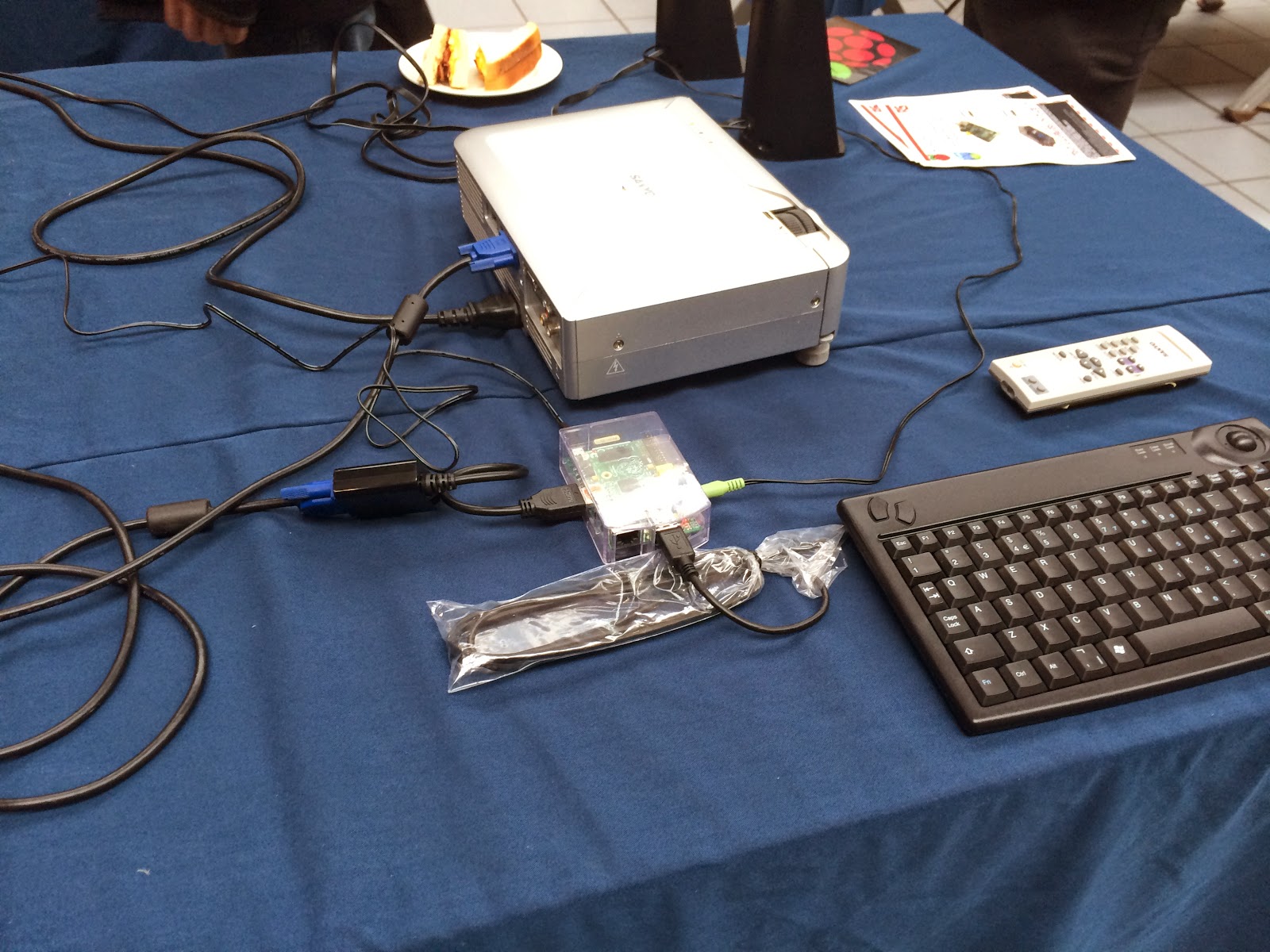 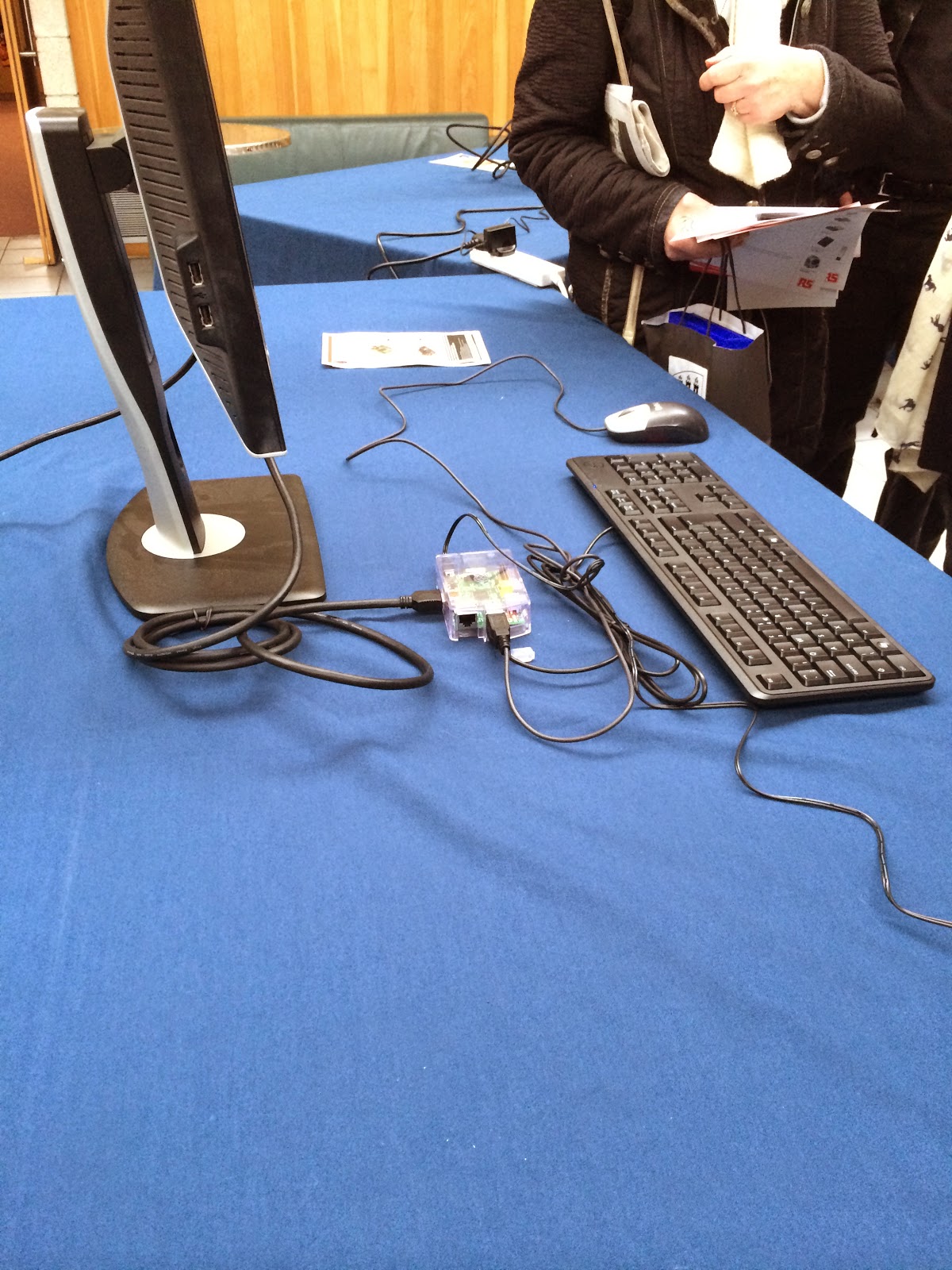 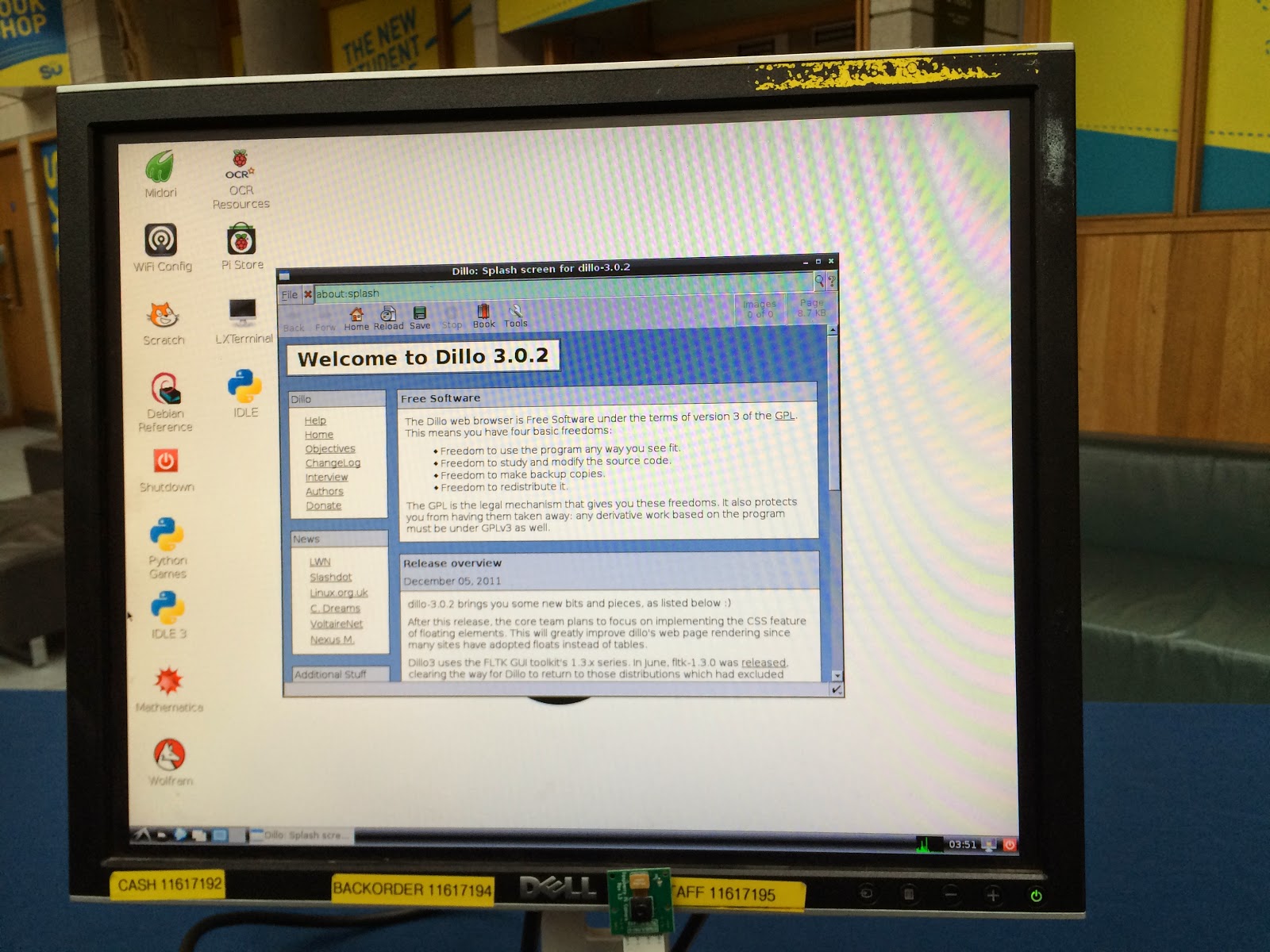 Raspberry PI is a general use pc. Raspberry PI is available from RS Components, and can be purchased online.  It has a small range of accessories, like an 8 GB SD card pre-loaded with Raspbian (V. of Debian needed to run). All you need to run the PI is available online to download via raspberrypi.org. It really is the size of a credit card. The PI store has free (and small fee) apps, games, tutorials etc. to install for further functionality. In Ireland they are Radionics Ltd. (rswww.ie apparently, but I can't get it to resolve today!)

The Raspberry Pi can be bought at  http://raspberrypi.rsdelivers.com/default.aspx?cl=1 :
(Copy and paste of details from the previous URL on 3/4/14)

RS Components in Ireland are offering Type B from a base price of €27.50 + VAT


It was designed to encourage children to program as many don't have access to PCs, rather games consoles etc.

Open Source applications can be run on the unit like Libre Office etc., making it a multi-tasking machine, not just for child prodigy programmers or 'computer geeks'.

spoke first. He works for RS Components who partner with the Raspberry Pi foundation http://www.raspberrypi.org/. Alan gave an overview of their customer and product groups to illustrate how becoming involved in the Raspberry PI was a change in corporate direction for RS Components. Traditionally the company is engaged in B2b retail with a strong online presence. Therefore beginning tos ell the Raspberry PI to personal customers was a big strategic shift for them.


RS Components, having a Global presence was well placed to assist with compliance to standards and regulations in multiple countries in addition to providing access to a global sales / provision network. For example the EU's CE mark is a different-kettle-of-fish to China's CCC mark etc. They assisted with resolving compliance issues globally. (CE, RoHS, WEEE, REACH Article 33 in the EU alone). in addition they assisted with IP licensing and compliance.

+2.5 million Raspberry PI units have been sold so far...

was the second speaker. He outlined the perceived need of a general purpose computer which would offer children the opportunity to engage in programming activities in the same serendipitous way as I did as a child with the ZX Spectrum 48 at home. [I even had geeky books as a pre-teen that included locating code in fiction to create programs... ] Basically the opportunity to engage with the black 'command' screen with the white cursor does not arise for every child as games consoles have replaced PCs in many homes.

The fall in applications for 3rd level places in the computing sciences at Cambridge sparked the idea of creating a cheap, robust, portable, fun to use unit that could be put into a child's bedroom.

An early proptype can be seen at the

in the Science Gallery @ TCD  (See more at https://dublin.sciencegallery.com/events/2014/03/flounderssciencegalleryfailbetteredition)

The initial concept emerged in 2006, but didn't go on sale until 2012. The unit kept evolving the whole time. The initial plan was to produce 1,000 units to entice school children into studying computing science at Cambridge. An initial components list included DRAM, a processor, network connectivity, PCB... the working unit now has +180 components.

By the end of 2011 it was known that the unit could be built for the price envisioned originally (that of a school text book), and that there was a huge community of interest behind the concept (+600,000 views of the original YouTube video about the PI). The foundation was set up as a not-for-profit entity and it was at this stage planned to produce 10,000 using funding raised by the founders. However website traffic indicated a higher demand... making the foundation abandon the plan to produce them in batched of 10,000 with each batch funding the succeeding one.


An e-mail via RSDesignSpark (http://uk.rs-online.com/web/generalDisplay.html?id=pcb (maybe?)) resulted in the production of the unit being sourced in Wales with Sony rather than in China (for which costings had been sought). Dr. Upton wonders if the tipping point has come and manufacturing is now becoming competitive in the West...

Working with RS Components changed the business model from a capital intensive one for the foundation to one where the selling of 100,000 units on the 1st day of availability was possible. To date +2.5 million have been sold and applications for computing science at Cambridge have increased too.

The usage pattern for the Raspberry PI has evolved over the past three years, this is reflected in the foundation's blog posts, illustrating that it is achieving what it set out to do.


Adults tend to use it to control things, everything home security or home breweries has been tried.

There is a strong community and user groups around the PI. Get togethers called Raspberry Jams occur.

Dr. Upton mentioned that Google have been very supportive, helping provide +15,000 units for use in the classroom. This sponsorship has helped reach more schools faster than planned. Some units were also distributed via Coder DoJo (http://coderdojo.com/) and Codeclub (https://www.codeclub.org.uk/)

The MagPI publication is available through the PI store and in print.

Accessories are available for the PI which are produced by 'cottage industies'. For example no case was include in the design, so there are several options for procuring one.


Applications that run on the PI includes the MIT Scratch Programming scheme. Minecraft (game) for PI includes a programming interface.

See where people own Raspberry PI's on Rastrack (http://rastrack.co.uk/) designed by a 14 year old.

2014 sees the introduction of support materials for teachers to help in the delivery of the new 'blessed' subject of computer programming for GCSE's in the UK. It is hoped that this will see a uniform basic skill level in new entrants to third level c. 2020.  No immediate plans exist for upgrading the unit exist.

Dr. Upton indicated that computer programming skills are foundation skills for the upcoming generations or a literacy skill.

Cambridge Assessment have been involved in the creation of a MOOC for GSCE Computer Programming, (120 short videos).http://www.cambridgegcsecomputing.org/

To complete the event 10 anniversary editions of the Raspberry PI were given away to attendees.


Tweets of the day curated on Storify.com

The event trended in Twitter for Ireland - here are those tweets curated via Storify.

from https://dublin.sciencegallery.com/events
MAKING A COMPUTER: EBEN UPTON, CO-INVENTOR OF THE RASPBERRY PI
€5 - PRE-BOOKING ESSENTIAL
Most kids don't program computers anymore. Eben Upton co-invented the Raspberry Pi, a tiny and affordable computer, so that kids could rediscover the satisfaction you get when you write your own programs. Over two million Raspberry Pis have been sold since the company launched in 2012, and there have been several prototypes along the way.
more information...
BOOK NOW

THE ULTIMATE RASPBERRY PI WORKSHOP, WITH SOME HELPFUL TIPS FROM THE CO-INVENTOR [FULLY BOOKED]
€35 (BYO PI) OR €75 (PI + SD CARD INCLUDED)
A one-day intermediate-level workshop for Raspberry Pi with Vicky Lee that includes a free ticket toEBEN UPTON’S TALK ON THURSDAY APRIL 3RD and an opportunity to pitch your idea to Eben directly, just before his talk.
more information...
BOOK NOW